Side Stand Switch Not Killing

By LowRyter,
August 25 in Technical Topics 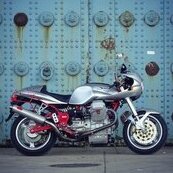 Raising the kickstand closes the circuit, which I believe then energizes the run/off switch, so worst case... you just cut the switch off and splice the ends together. * I'm 99% sure of this... the

A more elegant solution, in the event the Sidestand Switch will not close and energize the Run Switch is to lift the seat and "hot wire" the middle/#3 relay (30 -> 87) bypassing the neutral switch