Hey everyone. New member from Oakland, CA. I posted in the Rosso Mandello registry, but thought I'd do a proper intro here.  I recently rode with forum member Woodburn, and the sound of his bike reki 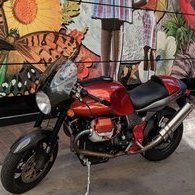 Greetings!  Last week I got really lucky.  After looking for a motorcycle for over a year and a half with no specific model in mind, I came across a really nice example of the 2001 V11 Sport Rosso Man

Hi, Bob here. 66, retired. Bought a project Sport about 3 weeks ago. Have owned around 15 motorcycles over my riding years. The MG is my third Italian bike, the other two were dink’s, a HD Aermachi 65