By Icenian
January 13 in Newer models

Whichever one you buy it's important to remember that you are buying machines long out of production and a lot of parts are getting increasingly hard to source. Virtually anything cosmetic and you're 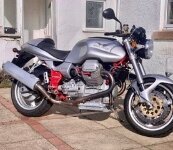