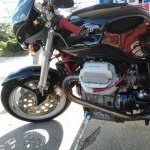 Finally, an update. It has been about 3 hours since I got to actually ride the V11, and I haven't come down yet. Oh my word, what a machine. She's a bit unrefined, but still...dignified and graceful.

Consider it done! Glorious 133 mile day on hilly backroads, almost no traffic (I did pass that one Porsche. Because I could.)  Perfectly clear, dry 60ºF/ 16ºC. Not the greatest view, bu